“Their service here is terrible lately.” Aiden remarked to no one in particular as he sat alone in a dimly lit booth await someone to take his order. He was sent here by the Warden-Commander to meet with an agent of the Voice for a special assignment. He was at the appointed place at the appointed time with no sign of the agent or the wait staff. The Human sighed in exasperation and absently glanced a nearby holoterminal displaying the latest round of the Huttball championships.

A unremarkable protocol in a bowtie approached the booth holding a datapad. “Excuse me sir, are you Aiden Lee?”

“I am.” Lee replied with suspicion in his voice.

“A gentlemen left this datapad at the front desk for you. He said it belonged to you.” The droid handed Aiden the pad which sprung to life when his thumb hit the screen. “Uh, thanks. Can I order a drink?”

“I’m sorry Mister Lee, I am not equipped for that function. A server will be with you shortly.” The droid bowed and scurried back to the front of the establishment.

“Blasted droids,” The Human remarked as he studied the datapad.

You have been referred by your clan leaders for a sensitive mission. A former agent of the Voice named Cado Altair has gone rogue and is threatening to sell Brotherhood secrets to the highest bidder. This must not be allowed to happen. Intelligence pinpoints the Bothan’s location as en route to Nar Shaddaa, Besadii District to meet up with a buyer for a holodisk of stolen intelligence and research data. He must be eliminated before he has a chance to meet up with the buyers.

The meeting place for the transaction is likely to be under heavy guard. Eliminate the target prior to the meeting.

Parameters:
Eliminate the target prior to the meeting on Nar Shadaa. Retrieve any droids or holodisks in his possession

Attachment:
Name: Cado Altair
Gender: Male
Race: Bothan
Distinguishing Marks: Dark fur, facial scar and eye patch on left eye
Affiliation: UNKNOWN, Former agent of the Voice and Clan Taldryan
Classification: Kill on sight
Military Training:
Cado is recognized master of [Jewsandi]( and close quarters combat. (Primary Martial Arts and Bladed Weapons rated at +4). He is also extensively trained in explosives and sniping (rated at +3 each). Approach with caution.
Known Associates: Believed to be in possession of a IG-100 Magnaguard droid from the Voice. Serial number CR-ZY-88. He may be using the droid as a bodyguard.
Image: 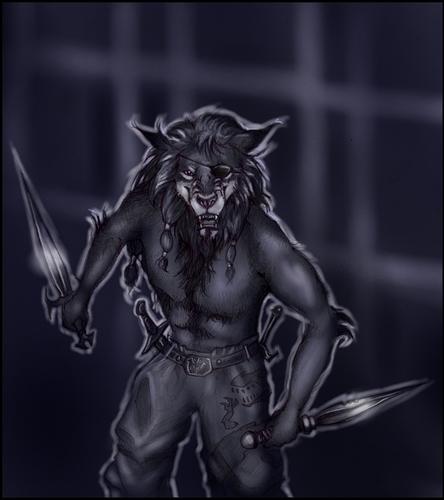 Aiden got up to leave the tavern after receiving his contract. As he was about to leave the establishment, he looked behind him to see the server droid finally make its way over to his, now vacant, table.

“Blasted droids.” He muttered to himself as he left out the door.
…

Aiden sat aboard a transport ship on its way to Nar Shaddaa. He could clearly see the moon city from space and could almost smell that rank pollution.

“It had to be Little Coruscant, didn’t it?” He chuckled to himself.

“We will be arriving at Nar Shaddaa momentarily. Please, wait your turn and exit in an orderly fashion. We sincerely hope that you have enjoyed your voyage today.”

A loud chorus of groans and mutterings rang throughout the hold as passenger’s voice their unhappiness with the flight. Aiden rolled his eyes at the childish reactions of the other passengers.
As time passed the vessel docked on Nar Shaddaa, and Aiden began to make his way, silently, to the meeting spot. He found a hiding spot, and waited patiently meditating to have control over his own body. He could feel the force flowing throughout his cells and it gave him a sense of serenity that he often lacked.

Aiden was awoken from his trance as he began to sense a nearby presence. He looked from his hiding spot and could clearly see a Bothan with a nearby droid walking up to the meeting spot. The Bothan had an eye patch over its left eye and several scars along his body. This was definitely the target, Cado
Altair.

“I’ve got you, traitor.” Aiden said softly to himself.

As he prepared to engage the target, he noticed Cado began to sniff the air, as if looking for something. Aiden froze as Cado turned and looked in his direction. Dread flushed throughout Aiden’s body as Cado began to growl and then vanished.

Realizing he had been discovered Aiden ran from his hiding spot to attempt to relocate to a better vantage point. As her ran he felt a shiver through the force and slid down narrowly escaping a set of daggers that slashed at where his head just was.

“So they sent a new guy after me huh, their mistake. You won’t be going to back. Well, alive at least. Ill ship you back in pieces.”

Aiden felt a pang of terror, but using the force he was able to center himself before losing control. He realized that this Bothan is obviously well trained. The only thing he could think of was forcing the target to lose his own focus.

“What is that foul odor, oh wait that’s you.”

“I’m just saying, your breath reminds me of a Hutt, who’s spent the entire day out in the sun on Tatooine.”

“Why you arrogant little worm.”

Cado leapt forward slashing at Aiden, as Aiden pulled out his dual vibrorapiers and parried the blows. By making Cado go berserk he effectively caused the Bothan to lose focus, thus making his weapon usage not as effective.

Still, though, Cado was well trained with his daggers, and Aiden felt it as his left arm received a deep gash by a well-timed counterstrike. Aiden backed away a bit as pain seared through his arm. Aiden focused on the force, alleviating his pain and prepared himself for the Bothan next strike.
Cado again using his extensive training in both bladed weapons, and Jesawndi was towering over Aiden in terms of skill. His brute strength proved to be almost too much for Aiden who was just barely deflecting each blow, due to his own training in Jar’Kai.

Aiden could sense what the next strike was going to be, as Cado slashed again at his left wrist. If he took the hit, the dagger could sever his hand, if he blocked his weapon would be knocked away. Smiling, Aiden chose to block the dagger, and focused the force in his left hand. As the vibrorapiers flew out of Aiden’s hand, lightning shot out, blasting Cado in the chest.

Once more Aiden realized he was in danger, and he rolled to the right, barely dodging blaster fire. The droid that was with Cado, a MagnaGuard, was firing at him.

“Blast, because Cado himself wasn’t enough.”

Aiden was forced to pull out his Armory lightsaber, and activated the blue beam. He drew upon all of his training to effectively guard the constant blaster fire, the magna guard was firing.

“Why did it have to be a MagnaGuard?” Aiden asked himself.

Too preoccupied with the droid, Aiden didn’t notice Cado get back up, and rush him, jamming a dagger into Aiden’s side. Piecing agony shot throughout Aiden’s body as a blast also hit him in the shoulder, and he dropped to the ground. His lightsaber deactivated and skidding across the ground.

“Stand down.” Cado said to the droid as he stood over top of Aiden. “You have been a real thorn in my side here boy. I might have eve missed my buyer, because of you. So you know what I’m gonna do. I’m gonna kill you, nice and slow. I’m gonna listen to you scream, as the life leaves your worthless body. And I’m going to enjoy every last secon……ugh.”

While Cado ranted about his victory he failed to notice Aiden hold out his hand and pull on the hilt of his lightsaber with the force. While his powers were shaky from the extreme pain he was feeling, he barely made the hilt obey his wishes. But the lightsaber did fly into his hand and with one quick slash, he bisected the gloating Bothan. A red mist shot out form Cado waist as the wounds were cauterized by the lightsabers intense heat. Unable to speak Cado’s top half slid off his bottom and fell to the ground.

“Thanks…for ordering the droid……to stand down.” Aiden groaned out as he stood back up slowly. He searched Cado’s thing and found the stolen Halodisk, as well as at the MagnaDroid’s control rod. Walking over to the droid he ordered it to follow him, as he made his way towards a medical facility.
Aiden took one more look at the MagnaGuard.

Sorry for the delay in grading your contract, and I thank you for your patience as we go through all the contracts.

In my opinion, you wove a very nice and short story, but felt that you rushed things a bit…! To your credit, you played with some humour, didn’t make things too easy for your character, which resulted in a very enjoyable read. I truly believe that you have some very good writing abilities, and I encourage you to keep writing…!

Unfortunately, you had a lot of grammar and syntax issues throughout your text. Almost every line you wrote had something wrong with it. A lot of these errors could have been avoided by simply having someone proofread it for you. I didn’t list them all, but wanted to at least list some of them here for your future reference:

as [passengers] [voiced] their unhappiness

Cado, using his extensive training in both bladed weapons and [Jewsandi], [towered] over Aiden in terms of skill. His brute strength proved to be almost too much for Aiden who was just barely deflecting each blow, [thanks] to his own training in Jar’Kai.

Note my edit above, and how I removed some commas from your text.

A red mist shot out [from] [Cado’s] waist

The Force, respect it and it shall respect you…

He could feel the [Force] flowing

As [he] ran[,] he felt a shiver through the [Force] and [slowed??] down[,] narrowly escaping a set of daggers that slashed at where his head just was.

Aiden felt a pang of terror, but using the [Force] he was able to center himself before losing control.

He searched Cado’s thing and found the stolen Halodisk,

Ok! Now I forgive you everything! You’ve been playing Halo far too much!! Hahaha…!! That should have been Holodisk, but hehehe… cute.

Try not to switch verb tenses in mid sentence:

Aiden focused on the [Force], alleviating his pain and [preparing] himself for the Bothan[‘s] next strike.

His lightsaber deactivated and [skidded] across the ground.

Your redeeming qualities were your use of humour – Blasted Droids…! – as well as the ideas that you had for the different plot twists. Your story had all the elements of a nice draft: It had some nice action, the story more or less flowed… You did invoke the various senses to draw your readers in, but you rushed things and left it more draft than story in my opinion.

Other than that, I think you did a nice job in melding the Character Sheets into your story to make it all the more realistic. Well done.

I’m a bit torn, Aiden… You had an interesting – if somewhat short – story to tell, but you didn’t take the time to verify your grammar or punctuation, etc. Maybe you did play too much Halo and left everything to the last minute, which is a shame because you could have gotten a really nice mark had you taken the time to polish your text a bit more.

Because of all the above, I had debated giving you a score of “Needs work,” but taking into account the story’s potential / realism, I’ve bumped this up a notch and expect to see something more refined / polished next time.