[CSP] The Great Heirloom Dagger of My Ancestors

This run-on competition isn’t about you, or your character! Well, not quite anyway. The story we will weave from now throughout the month of September is about a weapon as it goes through its own unique lifetime.

Everything has a beginning. Everything ages. Everything eventually falls to dust. But for a weapon, the time between its creation and its destruction can be a long and complicated journey. In its lifetime, this particular weapon could have touched every one of your characters in some way, but the weapon is soon parted with and finds a new owner. Maybe one of your old characters used it to get out of a tense situation, only to have lost it during one of their more daring escapes. It might later have fallen in their enemy’s hands as they pursued your character through the night. The decision is entirely yours. 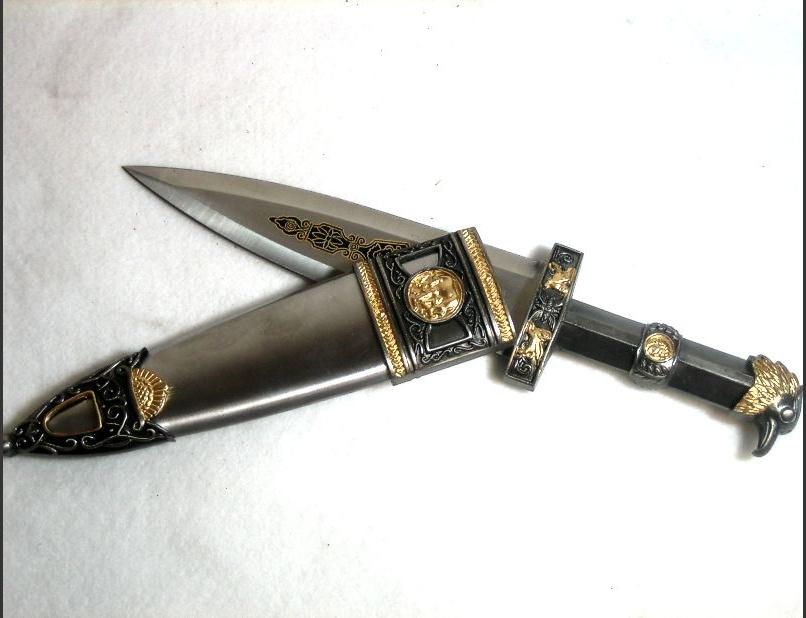 The smell of burning firewood and the rhythmic sound of a heavy hammer hitting metal resounded throughout the village as Uno set out to work on a what looked like a foot-long shiv of metal in the armory. He was a large torsoed man with powerful arms and sun-beaten, bearded face. His one good eye, was focused on the object on his anvil, as he carefully worked away with his hammer. With a final grunt, he struck one last time at the object before he shoved it back into the coals to warm it up.

A large meaty forearm whipped away at his sweaty brow; and with a satisfied sigh, he turned around to face the morning breeze as he patiently waited for the fire to soften the iron so that he could work on it some more. It was a perfect lazy morning according to him. His small indulgence over, he turns again towards the bellows and pulls out the piece of metal and continues from where he left off. There was something soothing about iron-working, and he took as much pleasure from his work as he derived from the pride of craftsmanship that went into everything he did. The forge echoed through the meadows and the villagers knew it was the beginning of a new day.

By the time the sleepy village had woken up and was finally up and about, the blade was submerged into a basin of cold water; the hissing of vapor mixed in with the sound of the crackling of fire as passersby waved at the blacksmith, who waved back pleasantly.

Noon finally came, and the hilt had been finished and the blade polished and sharpened. Uno weighed the dagger as he held it in his hand, brought it up to his eye for the hundredth time that morning, and nodded to himself. His thought interrupted by his young daughter’s gurgling and cooing. “Lunch is ready,” said his wife as he turned around.

“I’ve done it, Miranda! Look at that fine blade… the best I’ve ever done…!” He showed her the intricate work that had gone in the making of the handle, and the balance of the blade. It was perfect. His wife smiled at the pride in her husband’s voice. “I think the last time you said that was when, Meg was born!” She laughed and teased the young babe in her arms. “Get washed up, husband… I’ll not let you in my house with all that grime…! The dog won’t recognize you and eat you alive…!”

Uno harrumphed happily and set his work down, and followed his wife inside. The sounds of a happy wife and family, and a cheerful father echoing out from the open door, but when he had kissed his wife to thank her for the meal and went back to his smithy, the blade was gone.

The foul air seemed to crawl over the surface of the frosty, chilled moon. It wasn’t too too cold, but enough to rattle your bones ever so slightly with its suspicious fear-striking rawness. Ulress wasn’t home to too many, but it was home to this particular female. Perhaps she was the descendant of a mining family that left her behind. Or perhaps she was a castaway from an export ship and unluckily couldn’t find her way back home. Either way, she was living alone in the ruins of a mine shaft.

The Human female seemed to be 16 years of age, but her mind was much sharper and her heart much wiser. The precincts of her home were filled with all sorts of treasures she had found on the remains of civilization here. The other aliens of the planet referred to her as ‘the Wyrm’: Thief in the night who steals anything shiny and will do whatever it takes to succeed. She hadn’t been known to kill anyone, but everyone knew she might had the situation called for such a drastic measure. Though they knew her with this nickname, her real name was Driveena. Or at least its what she can remember.

The mine shaft dripped its familiar dew from melting icicles around her fire. She had just returned from stealing yet another find from a blacksmith some acres away. It still couldn’t settle in her mind as to why more and more people continued to come here, especially with the rumors about of an impending war in the galaxy, but she didn’t bother sticking around to ask questions. Her mission was always to get the gold, get whatever she could. She had hoped someday she would be able to sell all of her found treasures and get off this Ashla-forsaken planet.

Driveena sat down by the fire and roasted another frost rat over its burning embers. This was the 4th one she had eaten this week. She could never allow herself to complain though. At least there were still frost rats down here for her to chew on. They saved her from having to give up her spoils sooner rather than later. Thankfully plenty of fire wood and building supplies surrounded her in the desolate caverns. Every now and then she could hear howls in the dark from unknown species below amongst the darkness, but she decided a long time ago to never investigate too far. Her home and her fire pit were all she needed: a small little outpost in the shaft that seemed to be a former miner’s settlement. When she first arrived here, she was fortunate to find herself old blankets to use. Since then, however, she had to learn the skills of sewing whatever furs and textiles she could find to repair what little shroud she had left. Her treasures were piled high by her makeshift cot, and glittered beautifully in the fire. Another treasure she captured from a civilian earlier this morning, a bronze lightsaber hilt with a tusk cat’s head as its emitter, sat on the treasure pile’s surface.

Driveena didn’t have the stereotypical “scratches on the wall” like she pictured most would. Instead, she had little piles of rocks everywhere of certain shades and colors, depicting how many months and moons had gone by since she arrived here. Over the many years, more and more piles of various colors of rock piled high into four foot towers around the pathways from the ground level to her little hut. As she crunched around the frost rat’s bones to flick her tongue around the meat it held for her enjoyment, she could have sworn she heard one of her piles tumble.

Her ears twitched with the sounds. Her eyes had eventually adapted to her atmosphere here, but they were still not quick enough to alert her of what would happen next. A shadow entered what little light Driveena’s fire gave off. She couldn’t see the figure’s face, but heard the voice that echoed through the mines and through her fearfully hollowed bones.

“I believe you have something that belongs to me.”