This is the posting thread for RO team 1 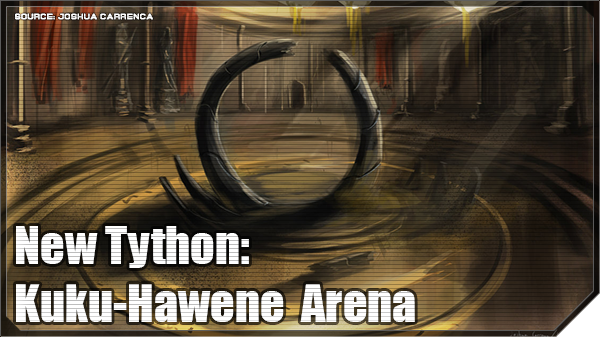 Combatants once fought in this cylindrical chamber in gladiatorial tournaments—Maia’toa nobles looking to further their influence or criminals with their honor and life at stake. For some, it was a sentence—for others, it was a chance to prove themselves in the face of their gods.

Statues resembling warriors of the Maia’toa stand in remembrance for those who were found victorious in their quest to prove themselves. Although few of these are still intact, their presence is somewhat unsettling to those who visit the now-silent arena. Aside from these statues, the room is barren save for an ominous relic that lies half-buried at its center. Jutting from the earth, a ring of unknown craftsmanship stands in between the two doors opening into the chamber. An unobstructed view can be traced from one door to the other through the portal of the ring’s opening.

“Enter the labyrinths of Kuku-Hawene, face the trials, find the Heart of the Force.” That had been the charge to all the Odanite teams as they entered the lower levels of the ancient city. Force user and non Force user alike had been permitted to face the trials, only the worthy would reach the end. After wandering through what felt like kilometers of underground passageways, Zoso, Xan and Torin entered the arena chamber. As the door closed behind them, they knew their first trial was about to begin…

The three soldiers stood in the arena, a calm stood over the trio as they stared at the arena around them. The trials were an unknown feat to get through the labyrinth they now faced. Zoso looked at the Medic and Marksman, men she had worked with before and trusted almost entirely. The Lieutenant Colonel nodded briefly and smiled widely, her golden face nearly splitting in two. “Well, boys. Looks like we have a new job today. Figuring out what to do here.”

Torin and Xan both grinned and nodded at the Mirialan. The Dashade was particularly unnerving, but a damn fine medical officer and the Human was one of the finest snipers she had ever met. Quinn briefly thought on the few missions she had served with the two. Torin served with the Melewati, a dangerous group to be certain, efficient and lethal. Xan was a pleasure to work with as well, even if many things escaped his notice.

The strange door before them rumbled open and the group looked into the dark tunnel ahead of them. “I truly hope these trials are mostly about fighting someone. Force secrets hurt my brain,” Quinn muttered.

The soldiers marched down the tunnels, scanning their surroundings, weapons at the ready. After a short time, they entered another large chamber with writing on the wall.

“Those who seek the Heart must prove themselves here first. Only the strongest of will shall find themselves able to proceed.”

Quinn looked at her companions and sighed. “Never easy is it?”

The woman looked at her companions and clenched her fists, a smile on her face once more.

Xan nodded in response to Zoso. “That tells us a lot,” he said aloud, pulling a thermos and three cups from his bag. “Until we figure it out, anyone up for Manellan Jasper?”

Torin gave the Dashade an odd look. “You drink tea?”

“Yes,” the Doctor humbly replied, pouring himself a cup. “I find it amazing. Anyone want some?”

“Put the tea away,” Zoso stated. “We don’t have time to waste. There is a fight coming.”

“All man needs his rest. We should all rest really, if there is a fight coming, let it come to us. Is there really any need to rush ahead when we could prepare?” Xan countered.

The doctor took a seat, his cup of tea in his hand. As he did, both Zoso and Torin turned away, exasperated at the antics of the Dashade.

“So,” called out a deep voice. “You are here for your trials. It is a shame you will fail so soon.”

The trio of soldiers turned to face the voice. Half a dozen men and women of different species seeming to have appeared out of nowhere. There was no obvious connection or affiliation between them, however they seemed to be a perfect fit for each other at the same time. In the center was a tall, female Iktotchi.

Zoso and Torin immediately sprung to action, Zoso pulling out her .48-caliber slugthrower, and Torin drawing his Dl-18 blaster pistol, taking aim at the Iktotchi. Xan noticed that the sniper appeared to be out of his element, and looked down at his tea.

“You can give up now,” the Iktotchi stated calmly, “No one will blame you for not passing the trials.”

“That is true,” the Dashade said humbly. “But, you are clearly outmatched.”

“Come now, you can’t be serious,” the Iktotchi said, annoyed by statement. “You are outnumbered two to one. You have no chance!”

With that the Iktotchi struck out with the Force, trying to show up the Dashade. Xan rolled back due to the blast, and the tea spilled over his armor. Xan rose to his feet, his looming form bringing him above the Iktotchi.

“That tea was made for me by a friend,” Xan stated with no trace of pride in his voice. Then he felt his hunger well up, almost over taking him. Stunned by the sudden rise in his hunger, he was taken over for only a few seconds. “I’m going to destroy you for that.”

If Torin or Zoso were caught off guard by that statement coming from the usually calm Dashade, neither showed it, both focused on their foes.

As the metal cup that once held his tea clanged to the ground, the sound echoing through the chamber, Xan sprang on the Iktotchi. As his large hands closed around her throat he lifted her from her feet and squeezed with every ounce of strength in his one hundred kilo frame. As her eyes began to bulge in their sockets and her skin began to turn purple the Dashade roared and tossed her aside like she weighed nothing. The Iktotchi hit a wall a few feet away with a loud thud before she slumped to the floor.

Across the room Torin took aim at a Rodian standing before him and fired, the bright red bolt of energy bridging the gap between the pair in a heartbeat. The bolt struck the Rodian in the shoulder, spinning him through the air like a top, leaving a smoking crater in the alien’s green flesh. But while he’d been dealing with the Rodian another of the opponents had been making moves of their own. Before the Rodian had even hit the ground a body slammed into his side knocking him from his feet. Rolling as he hit the ground he managed to catch a glimpse of the being that had struck him, a massive Zabrak male who looked like he could go toe to toe with a Wookiee and win.

In the meantime Zoso had opened fire, striding forward to close the distance between herself and her opponents, using her slugthrower to keep her enemies off guard. As she closed within range she unleashed a wicked roundhouse kick, the heel of her boot slamming into the temple of the Human woman in front of her. The kick was delivered with such force and accuracy the woman fell to the ground unconscious. Before the woman’s companion, a Quarren, could even react Quinn had her slugthrower pointed at his knee. The slug exploded from the barrel and ripped through the Quarrens joint, the squidhead dropping to the floor screaming in pain. It was then that she heard Xan roar, her full attention now on the rampaging Dashade.

The Dashade roared in anger as he once again lifted up the Iktotchi. I must eat! his hunger said, controlling the hulking medic. What was left of Xan’s conscious fought back, using all the memories and will power he had.

Memories of his missions flooded his mind, the build up, the mission itself, the aftermath. He saw his patients fighting against disease, and yet, for once this was not enough to stop his hunger. He could not access Wobow and Kranii, and was terrified. He watched as he began to consume the Iktotchi, and saw the terror in the female’s eyes. Xan blacked out, the beast taking control.

Xan was exiting the clinic, having just pulled a double shift. His orange eyes scanned the area with a tired interest. He saw the usual, security guards, patients entering, and land speeders moving around.

“Dashade,” came a voice from behind him.

Xan turned to the sound of the voice and was shocked by the person standing before him. A male Kiffar stood in front f him, leaning against the side of the clinic. The Kiffar was shorter than Xan, but not by much, and was in tight black leathers. The tattoo on his face, which was a deep green, appeared to be a crescent moon going across his nose. What was more startling was a lightsaber strapped openly to his waist. Then there was his hair. With his orange brown hair, there was almost no way he was fully Kiffar.

Xan had never seen this man before, but since this was New Tython, he did not react when he saw the saber. “Who are you?” the medic asked.

“Who I am is not important Dashade,” the Kiffar said. “What is important is this. I have seen you in the three times that things have been calm enough for me to look into the future. You play some important role, I don’t know what. I have come to stop your hunger from destroying you.”

“I’m not really a Jedi,” the Kiffar said. “I can use the Force, and a lightsaber, but I have had no Jedi training. That is besides the point. Fight against the beast inside you with all your might, because if you don’t, you will die.”

Xan’s conscious rose up again, battling against the beast. STOP!, he told himself. His body stopped moving, and he glanced at his comrades. I will not fall to the beast, he thought. For their sake.

As Xan pulled himself out from his hunger, he collapsed briefly. He noted that his two companions were watching him carefully, trying to figure out if he was altogether safe to be around at the moment.

“I am fine,” Xan said. So close to being lost completely… That Kiffar was right. I may not physically die, but who I am will. Is this the best path for me? These adventures… I have seen enough combat for a lifetime.