This is the posting thread for RO team 2 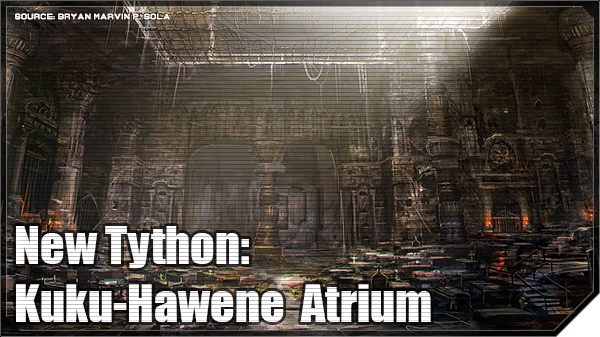 Between the various passages leading elsewhere within the underground complex of the Kuku-Hawene lie several atriums serving as hubs. Cracks in the foundations have ruined several entrances through the ages, blocking routes that could lead to never-before-seen repositories of historical value. Ornate columns support what little remains of the ceiling; several segments lie in fragments on the moss-covered stone.

Overhead, a block of stone has been removed to allow for natural light to bathe the chamber in a radiance that falls on the murals and markings carved into the walls. A wooden grate covers the hole in the ceiling; having once served a defensive purpose, it has since fallen victim to rot and the ravages of time.

Lit for centuries, a number of braziers mark the remaining entrances—their eternal flame basking the passages in a warm glow that persists even after the sun passes over the skylight where its light cannot illuminate the chamber. Iron gates protect a few unexplored passages—some locked, others sheared from their hinges.

“Enter the labyrinths of Kuku-Hawene, face the trials, find the Heart of the Force.” That had been the charge to all the Odanite teams as they entered the lower levels of the ancient city. Force user and non Force user alike had been permitted to face the trials, only the worthy would reach the end. The somewhat unorthodox team composed of Tekk Parsa, Jason Hunter, Jalen Ramz and Suur paused in the Atrium to gather their bearings. It remained to be seen whether their greatest trials would come from the temple or each other…

“Why are these frakking tunnels so hard to walk through” came the annoyed voice of Jason Hunter as he knocked his head for the sixth time since they’d entered the temple.

“I dunno,” replied a small voice from behind him “I’ve got plenty of room.”

Turning around as best he could in the enclosed spaces of the tunnel the foursome where currently making their way through he looked down at the source of the voice and scowled. “Of course you’ve got plenty of room Tekk, you’re small enough to punt.”

As the groups other mercenary member Suur let loose a low chuckle at the exchange Jalen Ramz, the Falleen Jedi at the head of the group, said “Enough, there is a light ahead. Prepare yourselves for combat.”

As they exited the cramped tunnel and moved into the light the groups Jedi, Jalen and Jason, ignited there lightsabers. Jalen’s purple blade coupled with Jason’s blue cast an eerie glow over their faces. As Tekk stepped from the shadows he raised his rifle and began to scan to large open space before him looking for any sign of trouble. As Suur, the last of the group to exit the tunnel, stepped out into the light he let out a low whistle and said “Wow” quietly to himself.

The room was large and bathed in light from a large hole in the roof that illuminated the various columns and murals decorating the walls around them. Off in the distance there were four or five doorways, some blocked
by gates or debris. As the group took in their surroundings something caught the inquisitive Aleena’s eye. “Ooohh, what’s that?” he said to nobody in particular as he ran off towards a far wall to investigate.