This is the posting thread for RO team 3 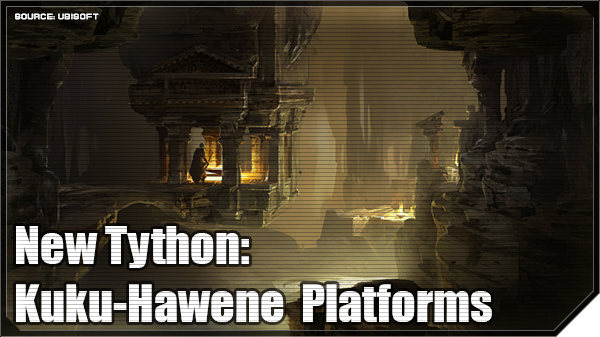 Crawling through the passages and junctions that lead to a tall chamber, one might question the sudden terminus above a chasm. In truth, there had once been a bridge that connected an overhanging platform to the other side. Even so, this hasn’t prevented a few crafty individuals from devising some method to crossing the chasm and continuing along their journey deeper into the gauntlet.

The chasm itself has no visible end, fading into a haze of lingering dust that floats from the uncarved surfaces of this chamber. Whether maintained or stoked through some other means, beacons of fire mark the two points that were once connected, reflecting off the dust to create ambient lighting that leaves no crevice untouched.

“Enter the labyrinths of Kuku-Hawene, face the trials, find the Heart of the Force.” That had been the charge to all the Odanite teams as they entered the lower levels of the ancient city. Force user and non Force user alike had been permitted to face the trials, only the worthy would reach the end.

The Knight-Commander paused to examine the impediment to the path before them. Clearly, crossing the chasm was to be this team’s first challenge. The wizened old Jedi knew a solution would present itself in time, but the obstacles and trials on the far side remained unknown…

Warden Liam, Warden Lambow, Mystic Sa Ool, and Padawan Gui Sol, most of them senior members of their Clan, stumbled out upon the ledge leading to a gaping chasm. They all paused for a moment, recollecting their thoughts, as their previous half hour’s worth of movement through dusty and sometimes blocked passages meant that they were already fairly filthy. For the most part they had moved in silence, their shared sense in the Force guiding them through the passages, leading to this chasm.

They all had a general sense of each other’s emotions, Liam’s curiosity shining through, Sa just neutral in everything, with Gui struggling to maintain her enthusiasm to a point where she didn’t just broadcast her excitement at being asked to join this assignment at full blast. In contrast, Lambow’s sense was one of annoyance. This was to be understood, as many of the passages were more suited to those of somewhat smaller stature. Being a Wookiee sometimes really wasn’t all that great.

Nonetheless, they pondered this new challenge, the first real one they had to face in this mission. The other end of the chasm looked to be an impossible distance away, possibly even too far to levitate someone to the other side. They had over one hundred meters of rope as a matter of standard equipment, but this chasm easily would swallow up that length.

Breaking the silence, Lambow’s vocator clicked to life, “Okay. Now what? Any ideas?”

Gui glanced down, the mist in the chasm hiding everything under it in an impenetrable fog. Sa briefly glanced around, found his target, then kicked a rather large stone over the edge. They all stood quiet, waiting for it to hit bottom with their enhanced Force hearing, but heard nothing.

Very well, thought Gui to herself. She started to shrug off her pack. The others contemplated her actions, wondering what she had in mind.

“Masters, it’s clear to me that we need to see if there actually is a real bottom to this thing. That just leaves one choice,” she said, grabbing their rope and starting to splay it out. “I will simply descend, find a possible crossing point, then report back to you,” she continued while starting to get strapped into a rappelling harness.

Liam shook his head, but Sa was the one that answered. “No, Padawan. We admire your courage, but this needs to be a joint effort, not to mention we have no idea as to how dangerous it is down there. Its best if we proceed via another path.”

Gui frowned, but obeyed and started packing what she had started to take out. This was going to be tricky, they all thought. Very, very tricky.

Tricky?" -hmph- " If they think this is tricky they should’ve watched me replace that Axial Piston a few nights back. That protocol droid talks better than ever." He thought to himself but froze as the rest of the team glared back at him.

“What?” The boy added before he realized that his thoughts weren’t the quiet inside your head thoughts, but the out loud thoughts that often sunk him in reading material.

“Hey, I’m just being honest.” He stumbled through his dialogue only to catch himself trying to make a sorry attempt at changing the subject.

“You guys like’em?” The Kid added and slid the thermal goggles he had brought, down over his eyes. They were his own creation so he naturally found them more fascinating than ordinary ones. “They’re way better than that over-priced junk at the Market.”

“Yes, Gui. They are nice but you need to focus.” Came the stern yet warm command from Liam. “We need to concentrate on the task at hand, the Force is strong here.”

Such words made Gui perk up and glaze over in excitement. Truthfully, Liam knew, through experience, that Gui would ramble on for hours if you let him. Thankfully he was gracious enough to tactfully bring him to silence and focus, thereby relieving the tension of the furry giant and the grumpy Kel Dor. Both of whom shot him a look of gratitude as they pondered their current situation.

Hushed whispers bounced from the stone walls, quiet, but loud enough for Gui to make out what they were saying. Out of curiosity, he fell back to listen, to observe. Curiosity killed many a Cat, but most people could find the innocence and power in it. The often underestimated, inquisitive yet passive mind.

“Where do we go from here?” Ool sought, hoping to gain the same answer he had reluctantly acquired for himself.

“Down?” Lambow replied and his vocabulator crackled out the single word.

“Down.” Liam added as he paced back and forth. “What does the Force tell you to do?” He finished and locked onto the Kiffar. Gui, jumped and when he did, to catch himself, he gripped the stone railing in front of him.

A shudder in the Force tingled his being and the image of a robed figure flashed in his mind and seemingly leapt into the abyss. Quickly, Gui fought back the notion and slid his goggles back up. These feelings, though inherited, were still foreign to him.

“Embrace those feelings Kid.” Said the old man with his hands clasped behind his back. “You’ll need them.”

When Gui looked up, he saw Liam gazing into the hypnotic darkness with Sa Ool and Lambow on either side of him.

The corners of Liam’s mouth just creased as he flashed a smirk.

“What did I say, Gui?” Sa snapped, sniffing out the arrogance of human blood.

“You’ll always be a child to us, young one.” The Wookiee snarled, his brown fur flitting upwards as an updraft from below gently washed over it. As he sniffed the air, Lambow could feel the Force flowing through him. His interest in the chasm below becoming more seductive as he peered into the dark. Then suddenly, he was distracted by a flash of light which glinted off of his saber hilt. It came from below.

“Look at this.” He barked and the words followed soon after.

“You know, I could take a look at that when we get back if you’d like, Master Lambow.”

“Silence kid.” Sa puffed, “This is far more interesting than your skills.” He groaned, still somewhat annoyed. He then quickly redirected his attention to the shimmering light in Lambow’s lightsaber hilt. “I can only see it in the hilt, nowhere else.”

“Odd.” Liam whispered to himself as his forefinger and thumb twisted the end of his beard.

Sa looked away from the hilt and stepped forward.

“Something is out of place.” Came his robotic statement, followed soon after by a flicker of light dancing on his own hilt.

“Maybe we’re the ones out of place.” Gui added, throwing out one of his typically random ideas. They flooded his mind on the regular and to the surprise of those around him, were usually spot on.

This made the bushy brow of Liam bounce as Gui’s intuition never ceased to amaze him.

“Well, Padawan. What do you propose we do?”

Gui raised a finger and opened his mouth as if he were going to say something and then merely shrugged his shoulders. This caused Sa, who was clearly frustrated to throw his hands up and spin around.

“Patience, Sa.” The Commander, soothed. “There’s most definitely more to this place than meets the eye.”