##Below you can find a cheat-sheet of Shadow Gates Deep Cover Aliases.

Physical Description: K’tana is a creature of ego and arrogance. Although she has the ability to change her face, she changes very little. Her tattoo’s fade away, her eyes hide her pupils and become a light shade of violet. When she smiles she has teeth that are pointed like that of a feral animal. Aside from those slight differences, she sees no real point in hiding her face from mundane civilians. Besides, everyone knows all Twi’leks look the same to most humanoids anyway.

Occupation & Skills: Leader of a gang called the 27’s, Koekie runs the everyday operations of prostitution and drug peddling. She uses her resources to gather Intel on the underworld dealings on Ol’val and to keep the other gangs under the supervision of Arcona and Shadow Gate. K’tana is a very proficient killer, dancer and entertainer. Koekie is head of a notorious gang that once dealt with the unstable drug, Red Eye. With either persona, people underestimate Twi’leks and K’tana/Koekie uses this to her advantage, allowing her targets to think of her as nothing more than a pretty piece of flesh they can command. Once they are certain of her obedience, or impressed by her skills, they usually find the woman smirking in their face with her blade through their throat. 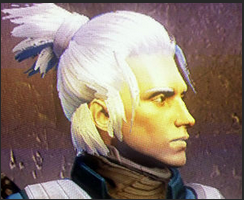 Description: Rick Alstot is an aristocratic, handsome Human with perfect skin, angular features and dark brown eyes. His medium-length, stark white hair gets pulled back into a high, feather-like bun while the rest spills over his ears and comes down to his lean jawline. Athletically build, he has an easy walk and wears fashionable clothing that looks quite expensive and always new. He likes to gamble, is loose with his wallet, and a lush when it comes to drinking (which is sometimes the hardest part to maintain, because Marick instinctively filters out any toxins that enter his body from years of training and his Knowledge of how toxins work. He never drinks alcohol, so he uses inspiration from others to adjust his performance).

Occupation & Skills: Rick is a lover, not a fighter, and has been caught on camera getting slapped, punched, and kneed in different places after saying the wrong thing to the wrong patron due to a helpless chauvantist streak.

There are rumors that he was once cornered in an alley-way by two hired thugs who were to shake him up and steal his credits. He blinded the first and called down lightning to strike the second dumb, and somehow escaped the encounter unscathed. Rick has written these off as wild exaggerations, and maintains that he was just lucky to be fleet footed enough to run away and screaming loudly like a woman.

Description:
Malikie is of average height with a athletic build. The long silver hair that runs down to his waist is usually smeared or matted with grease. Malikie is a dim witted mechanic, or so it seems. Usually dressed in greasy cloths and old boots, when leaving the Shop he can usually be found in dive bars dressed in old cloths and jean jacket. He openly carries a Blaster pistol on his right hip, though no one has ever seen him actually draw it as he prefers to use his fit only when he has too.

Occupation and Skills: He can usually be found in his shop Malikie’s Ship repairs and upgrades in Port Ol’val’s Docks. Using this front Revs AKA Malikie has taken the time to bug the surrounding Ducts and Las Tunnel with listening devices and cameras little goes in or out of the Port with out his knowing. Though appearing to be an easy target, all who seem to try and cheat the Miraluka end up on the ground.

Description: Physical Description: Dralin is a skinny fellow with a rather effeminate stature. He covers his medium length jet-black hair with a punkish black wig which has short hair all around save for the bangs. The fringe of his hair covers one of his smoky gray eyes. Usually, he is draped in a tight black shirt, fitted black jeans with a pair of sneakers and his nails lacquered with a void-black polish. Around his neck is a single silver chain with a pair of rings on it and his ears are pierced with small silver hoops. In the way of armaments he keeps his lightsaber clipped on the back of his right hip for easy access. Dralin keeps the Fang as a boot knife, an ornate Katana strapped across his back and on very rare occasions you can find him with an unlit cigarette in hand.