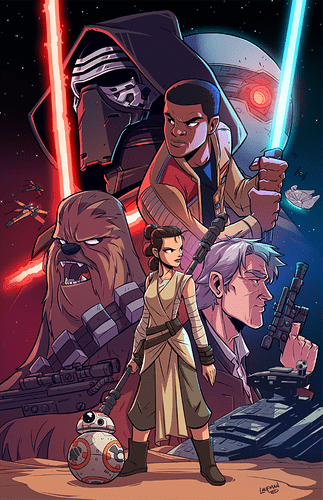 This week's report art is "The Force Awakens" by Derek Laufman

Welcome to another edition of the Taldryan Consul report. Admittedly, it's no longer nearly as regular a feature, and there are a lot of really poor excuses to explain that, but what it may lack in punctuality, you can at least always count on it making up for it with quality.. and for this week's report, we get to celebrate the buzz in the air of the most magical time. No, not Christmas. STAR WARS MOVIE RELEASE WEEK

Suck it Santa, this year we're writing letters to Sithy Claus and hoping like hell JJ Abrams hasn't ruined everything.

Headlines that you need to know

Episode VII Celebration is on!

So, at the time of writing this, I am currently 7 days and roughly... 20 hours away from when I have Star Wars tickets reserved, and we're less than a week away from the World Premier. That realization has me alternating between buzzing with excitement and just plain freaking out and not really being sure what to do with myself.

Thankfully though, the members of the Dark Council have come through for us and thought up a way that we can work off some of our nervous energy, with a series of competitions designed to celebrate the release of Episode VII!

We already have a couple updates on one or two or three of the competitions, and I know I'll be trying to compete in as many of these as I can, so make sure you all get out there and do the same thing!

The Grand Master's invitational tournament has been running for around three weeks now, and we've now seen the final conclusion to the first round. As you all should know Taldryan offered up Halcyon and Andrelious to be our two combatants in this exclusive tournament. The battles that were fought were extremely well written, and both our contestants did an excellent job, but alas at this point, only Halc has moved onto the second round.

You can read the Combat Master's update here, as well as keep an eye on the whole competition by visiting the ACC Tournament page.

Make sure you go check out Mark's battle here as well as Halc's here so you can see what excellent work your clanmates did!

Battlefront is awesome, and this is how to play with Clanmates

It should come as no surprise to anyone lately that the thing that has been dominating my own personal time has been none other than the newest Star Wars title out there... Star Wars Battlefront. Personally, as I've never been a hardcore shooter player, I have to say that this game is everything that I could have asked for. The visuals are stunning, the experience is pure... I mean, I never get tired of listening to blasters fire, or hearing TIEs streak overhead. It's a fanboys dream come true, and if you're able to pick up the game, I highly recommend that you do.

The first DLC: The Battle of Jakku is now out for all players who own the game, and the new mode that they added is insanely frantic and fun, and the maps of Jakku make me even more excited to see the movie. (Protip: There's a wonderful easter egg when you start the Turning Point map as Imperial.. if you look off into the background beyond the crashed Corellian corvette, you can actually see the Super Star Destroyer crashing to the ground.. likely the same Super Star Destroyer that is featured in Episode VII.)

A large contingent of our Clanmates have been playing on PS4, and a few of us stalwart master race folks have been trying to keep the banner held high on the PC. Nero probably has a fairly comprehensive list of PS4 IDs, and I've been doing my best to make sure I have everyone added on origin for PC players.

Make sure you go through and fill out the form and let us know your gamer IDs for playing.

On the DB Side of Battlefronting, we now have information regarding earning Pendants of Blood for gameplay, as well as a number of competitions geared around trying out some of the different modes.

Anyways, I'll be having a lot more free time toward the end of the month, and I hope to see more of you out there kicking ass!

News from the DC: Report Roundup

It's a new(ish) month, which means we have a deluge of Dark Council reports to read and catch up on.

There are a few open positions to apply for

It's a tribune kind of day in the help wanted section of the report, with both the Wiki and Recruitment Tribune's represented. Selika is seeking out able bodied members of the DB to help with the mammoth task of maintaining our wiki. As for the other guy, he's looking for warm bodies to fill up the Recruitment office's social media and news teams.

That is a huge list of competitions available and coming up, including our very own Taldryan Holiday Bash hosted by former Consul Rian Taldrya! I'd just like to take a moment in my sign off to throw a shout out to some of our newer members, including Tyron Kesh, Jedd Kunar and Aen Van Del who have all been kicking ass with their activity lately. Also, a big congrats to Aiden Lee, who was recently elevated to the rank of Knight. You guys are all doing excellent, and I'd like to personally thank you for being so badass!

This is a companion discussion topic for the original entry at https://www.darkjedibrotherhood.com/news/reports-taldryan-consul-report-buzzing-with-anticipation