New York Comic Con starts on Oct 9th, and it's expected more titles will be added to the upcoming Star Wars lineup.

Now on to some reviews. I've decided to start with a 4-part miniseries that ran earlier this year. This series titled Star Wars: Rebel Heist is written by Matt Kindt and drawn by Marco Castiello. It ran from April 2014 through July 2014. It's set between Episode IV and V, and offers a look at the heroes of the Rebellion from a different perspective, literally. Each comic is focused on a different character, but told from the personal viewpoint of another character in the story. It's interesting to see how these people view the "heroes" of the Rebellion, and how that opinion changes as the story progresses. 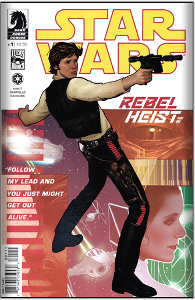 Synopsis: The first issue starts with introducing you to the narrator, a fresh Rebellion agent on his first mission. Jan(I was pretty sure this was a man, but every time I saw Jan, I was kind of wishing it was Jan Ors) is sent to Correllia for the first time to track down a contact. He's spotted by Imperials, literally the minute he walks in the door to his rendezvous, and is rescued by none other than our dashing scoundrel, Han Solo. The rest of the comic follows the pair as they try to evade the Imperials.

Impressions: Story-wise, it kept me interested. Watching Jan's opinion of Han is a highlight of the issue. The art is good, with some panels really shining, for example page 7; a full body shot of Han, blaster held up, smoking from a round of blaster fire. Some of it is kind of, meh. A lot of panels where Han's forehead looks like someone scribbled all over it.

Rating: 4/5 Overall, I think the story does a great job of "new guy along for the ride," and I feel it really makes the comic. 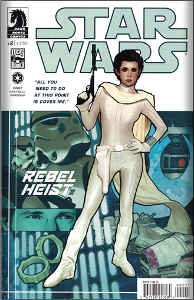 Synopsis: Issue # 2 focuses on Leia. Our narrator for this escapade is a Rebel spy named Sarin(I'll be honest. I giggled). Sarin is a twi'lek dancer stationed on the pleasure planet, Feddasyr. The war here is a cold one, of espionage and counter-espionage. Sarin's cover has been blown, and Leia comes in to salvage the mission.

Impressions: Once again the thoughts and changing opinions of the narrator are a real highlight of the comic. I think the art is much more spot on in this one as well. I enjoyed the chosen outfit for the cover, being reminiscent of Padme from Episode II.

Rating: 4/5 Solid issue, showcasing a side of Leia that doesn't show through in the movies. 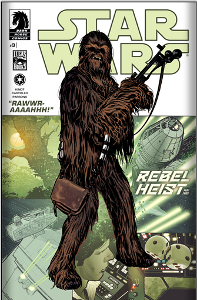 Synopsis: Unlike the transition from Issue #1 to Issue #2, we've carried over a character from the last issue, and he is now serving as our narrator. Our narrator, a former stormtrooper who was stationed on Kashyyyk. He rendezvous with Chewbacca. Chewbacca and the stormtrooper continue on the mission, with fruits of Leia's mission.

Impressions: If you haven't noticed a trend, this miniseries is all about the outsider's impression of the main character. Art in this is par for the course, although it's a little odd seeing Chewie in action, but likely just because you don't think about it as much while watching the movies.

Rating: 3/5 It's a good comic, but a couple of things kind of strike me as odd, and so that drops it a notch. 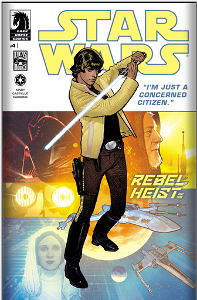 Synopsis: Last issue, time to bring it all together. Luke, our main character for this issue, is being tailed by an Imperial spy. This issue runs across the other 3 issues, and you can see a little more of what is happening in the background.

Impressions: Story-line is good. Our narrator is great. I don't know if I believe some of the saber play coming out of Luke this soon after Episode IV is as believable. A good denouement, and some interesting links back into the wider Star Wars universe make this for a good read.

Rating: 4/5 As stated above, it's a good read. I'm going to give the saber play a pass, because lightsabers are cool.

Overall, it was an interesting series. I really enjoyed the outsider's narrative and felt it was what really made this a memorable series.

The digital versions are available from the Dark Horse site here.

Next time on the Comic Corner, I'll be taking a look at Star Wars: Darth Maul - Son of Dathomir, bridging some of the gap between Episode I, and Season 5 of Clone Wars.

This is a companion discussion topic for the original entry at https://www.darkjedibrotherhood.com/news/star-wars-news-the-comic-corner

Hey guys, I put this together to spotlight some of the comics in the Star Wars universe. Would greatly appreciate thoughts on it. This is kind of a fresh thing for me, so expect it to adapt/change as I get a better idea of what exactly works in this.

Yay comics! Anyone reviewing SW things is ok with me. In terms of these specific comics…it’s hard for me to read most of the SW stuff now, knowing full well that it is no longer “canon”. Until the series of canon-stuff comes out, it’s really about the creators for working on the material. These ones do nothing for me, so I probably won’t be picking it up. This seems like an interesting concept, but honestly, it does nothing for me. Ah well. The only series I’m still reading is the Jedi Dawn stuff, which is literally how the Jedi came to be.

As for the format…I’m wondering if rather than focusing on each issue, you instead do an “overall” review? That only works if you already have a specific mini-series or storyline read and complete, but I think focusing on the entire storyline would be cool and review that in detail, littering your post with covers and art (if there was any posted online) for the comics.

But yeah, keep them coming! I’m looking forward to the Marvel stuff since they’ve put up some great talent, but I am going to miss the Ostrander and Duursema comics. Maybe Marvel and grab them to work on their SW stuff as well.

I’m with Halc on this. Until the canon stuff comes out, I’m not terribly invested in SW comics. But reviews are always good, both from a personal standpoint and from the standpoint of “advertising” the club, since it’ll show (I assume) in searches if people are looking for reviews.

I have not bought a Star Wars comic in many years but Star Wars: Princess Leia is definitely catching my eye. Mark Waid is one of my favorite comic writers. He gave me multiple nerdgasms in Kingdom Come, gave us Bart Allen in the Flash and much more. Also he writes female characters very well, especially seen in Batwoman. Waid is perfect to add some more female power to an almost all male galaxy

it’s hard for me to read most of the SW stuff now, knowing full well that it is no longer "canon

Agreed, but luckily the “Son of Dathomir” Darth Maul mini-series IS canon (per the Clone Wars Legacy stuff), so I’m interested in that series.

I really liked the original draft comic they did of “The Star Wars” also the series they just called “Star Wars” was great. Honestly I just have a stack of the Omnibus collections probably the best way to read comics. I know they’re technically not cannon anymore but that doesn’t mean you can’t enjoy them.